From pre-purchase research I knew that none of the projectors on the market would focus at a distance close enough to produce a 33mm image.  This was the reason I demolished those projectors, you see.  Lenses, from proper optical suppliers, cost a packet, £20 – £60 a pop for the budget ones.  Not knowing anything about optical engineering I knew that I would need a selection of lenses to try out.  Having broken my fair share of IT equipment, I knew that projectors contained plenty of glass stuff.  See; I’m not so mad.

An image with a 4:3 aspect ratio, which has a diagonal size of 33mm, according to Pythagoras, or at least my wild interpretation of his theorem, will be 27mm X 20mm in size.  So, this is the target. 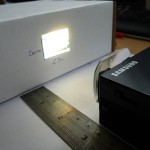 As you can see that image is about 7cm away from the projection source, so I am going to have to use a mirror, in order to mount the projector vertically.

I made a test mount, using a mirror from one of the projectors, obviously. 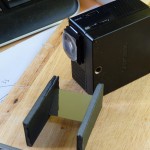 Without too much effort, I was able to get the pico steady and aligned, and an image around the size I wanted: 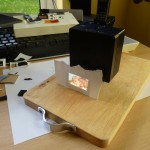 By Jove! We may be onto something here.

Without further ado, I attached the rig, somewhat precariously, to the headset, just to see.

To stabilise the paper & foam based modelling  material, I used a base-board of 3mm acrylic.  By the way; at this stage I was beginning to realise that glue guns rock! 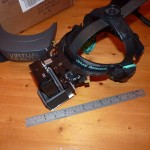 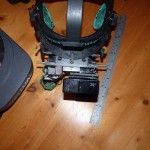 Now to turn it on… Ouch!  Turn it off, turn it off!  Lower the brightness, set lamps to eco-mode and try again. 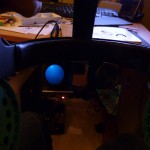 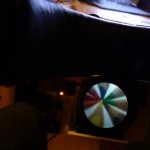 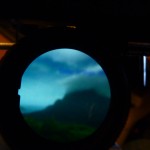 Now I just have to workout how to mount two of these buggers, and a VGA cable without breaking the current optic mounts.  It’s also worth noting, that since I bought two different projectors to scrap, none of the lenses, or mirrors are the same – which could be interesting.  Also these Samsung projectors have a few drawbacks which I’ll highlight in the next part… suffice to say, they have caused me to swear.

I also need to find a rear projection material, I have tried all sorts, but so far nothing gives anything like good enough results, even pro-grade film is very grainy.  This issue may result in a complete re-designing.