I stumbled upon the Transporter 3D project – on MTBS3D (where else ?) sometime around May 2013 on this thread:Transporter 3D Initial  .

It seemed that the idea was too good to be true, but the principle plan – utilising FPGA – could ‘probably’ reduce the latency to something you you could fly with…. Probably.

I signed up first moment I could for their Indiegogo campaign.  where they raised a very healthy ~21k CAD (£11.5k) for what is a very niche product. 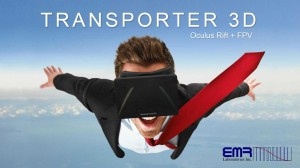 As happens,  – life takes over and other projects come and go.  Business gets tougher, personal life interferes and .. well – you know!

I kept one of my many eyes on the project – but wasn’t expecting anything, really until 2nd quarter 2014.  So to receive my unit back end of January was a real shock.  I hadn’t prepared!  I had barely even used my Rift for 6 months – save to demo to newcomers.   I certainly hadn’t flown my quads or used my DIY stuff because, well – life takes over and we have had a shit (SHIT!) winter here in the UK for any kind of flying.

I was humbled that Trevor from emrlabs.com had taken the time to contact me and we had a swift 1-2.  At this stage, I must confess – I wasn’t overly optimistic.  It still felt a little too implausible that the hardware did what they said it could do.

A couple of nights ago I had a spare hour and cobbled together the necessaries from items I don’t want to disassemble.  Basically my standard flight gear / demo stuff that I stick onto cars and what not.  This is what you get to play with: 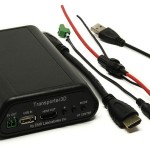 Let me say this in the most serious way I can;  read everything else I have written on this web site first if necessary.

Using the Transporter 3D  was as mind blowing and as fantastic as my first ever virtual reality experience.

There. I said it.  This statement in part due to the fact I now understand far more of what is involved technically.

The ease of use, visual fidelity and UTTER LACK OF LATENCY is simply astounding.  My DIY rifts using the original 5.6 panels are far better at HMD FPV video than the Fat Shark.  The panel in the Rift Dev kit is another step ahead – which I wasn’t expecting (FOV aside) the clarity is superb.  I am very very happy about this – there are many years life in these development babies.

So.  The Transporter 3D.

It’s basically a board that does everything the hobby FPV person who own a Rift would want.  Give it power.  Give it video signals & plug in your Rift.  If you want you can also use the rift sensors for head tracking.  I tried head tracking on my second quad (third? – I killed so many I forget) and found it too difficult : Z Head Tracking  but for ground vehicles and fixed wing… it’s great.

I haven’t had a chance to try this yet.

Nor have I had a chance to try stereo.  Sorry.  I took this opportunity to write this up rather than squander it on more fun.  The reason being I think this is important – because this product is awesome.  On Sunday / Monday when I get a  moment to de solder other cameras if it isn’t this awesome in 3D I’ll give you my soul.

So first off, you get a blank power cable in the box with the T3D – you get so much, it was as easy as receiving the rift dev kit – I was very impressed.

First things first – so attach it to something. I attached mine to a LIPO so this is what I ended up with after 2 minutes of solder. 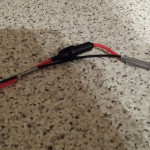 To show you what I was driving with I took it all to bit’s and laid it out.  Which I didn’t mind doing as it was pissing it down.

The camera here is a basic SN777 which I think has a ~70 FOV.  Works lovely – really well in fact – but I am looking to choose a higher FOV matching pair … I have no Idea what the other 4 cameras I have are currently as they have no distinguishing marking.  Also the receivers I have have been cannibalised and I know of lots of issues I had doing my first stereo… so basically.. what follows is really basic:

I couldn’t bring myself to tare down my ‘other’ cameras and receivers for what  thought was gonna be a let down.   I wish I had.

I am using my Fat Sharks to give the basic Video to the T3D everything else you see you should recognise.

It’s amazing.  Thanks Trevor! (And all EMR peoples!)

(I hope you don’t mind me stealing a couple of pics for decoration.)

I will update more when I have stereo (camera dependant) / some videos / some flight (weather dependant) or discover something brilliant.  Suppose I could test head tracking too.  Oh and the Futaba pass through!

So much to do!

This entry was posted in HMD Display, Projects. Bookmark the permalink.