I received some post from OzOnE2k10 (MTBS3D Forum Member) on Saturday – much to my surprise as I had missed his email saying it was en-route.

Within was the cable modification I had been waiting for … forever. It’s freaking awesome.

He has essentially extended the LVDS cable using an HDMI cable , the craftsmanship is first class – and not only has he extended the cable, he has integrated USB pass-through into it also!! I am so chuffed; I am no longer tethered to that bulky 7in1 driver board.

Since I only currently have one extension cable, I set about recreating a Rift with what I have… so, really it’s not a Rift at all; just a side by side HMD.

Although I had done this experiment a while back, the ability of not having to mount the 7in1 on my head makes it far more feasible. Indeed; as brushed on in 13.5 – I didn’t consider this low resolution to be worthwhile and so without the success of the Rift I would never have cobbled together these components to make an entire unit!

This whole thing took me about 4 hours to get attached and game of L4D working.
Last hours were spent (and since another couple more) trying to get a good demo working! Arrrgh!

Skyrim – I can’t make it work on the HMD – the Game loads but crashes to desktop when I try and load a game. If the 7in1 is unplugged it works fine on normal monitor side by side.
L4D2 – Works a treat and looks great. But can’t use buttons on mouse whilst Gyration mouse is engaged; when you can’t shoot or block in a zombie game, you quickly become zombie lunch.
L4D – Works and can shoot, but 3D is lacking.
MW3 – I don’t like this game at all, but works well – really suffers from low resolution.
BF3 – Hadn’t played for a few days so didn’t have the patience to update game, battelog, origin and then try and find a server… perhaps later 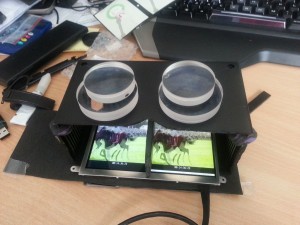 The distortion is nothing like this in real life, must be a camera thing… 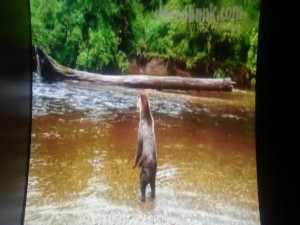 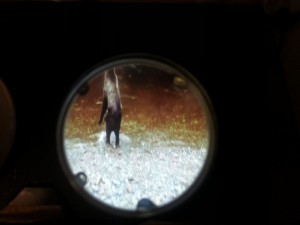 Glue gun dots these will just peel of when done

I had measured with  ruler starting at 0mm and cut with a ruler starting at -10mm I got off to a very bad start. I would rather not discuss this any further.  Suffice to say, things didn’t match up.  No train wreck though, really, as this is only a proof of concept – would have been nice to reuse some of the holes though, for as ski-mask version when I get the right lenses!

My lenses, despite their weight and duality STILL don’t offer the magnification and shorter focal length of the aspheric ones; so I had to fashion some adhoc pillars to raise the face plate up from the screen to bring things into focus. 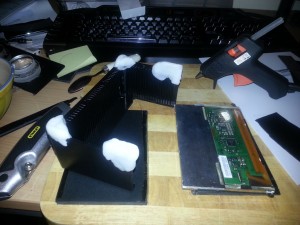 Polymorph to the rescue

Those unfamiliar with Polymorph are really missing out.  Just search for “polymorph”.  It’s a thermoplastic, which feels like low density nylon when set but can be molded like plasticine when hot; just pour a bit of boiling water over a half cup of pellets and grab what you want and mould how you like!  You can be rather precise with it; my pillars mounts above are just sugar cube sized globs squidged into place to make a perfect height for my faceplate, and smoothed round to grip into the main box.

Here is the faceplate; the lenses are just glue-gunned together (a reason why I like glass so much!) The separator is designed to push down and keep the screen in place via it’s upper and lower bezels. 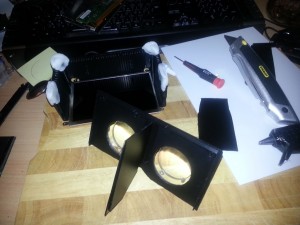 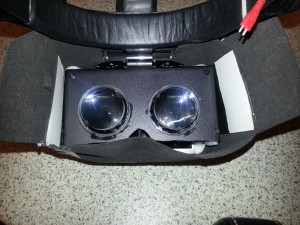 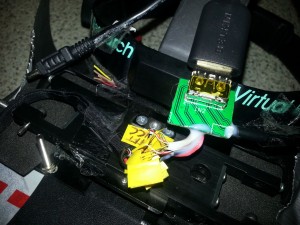 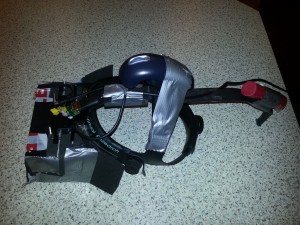 The mouse is a Gyration Ultra 210 – Which is actually rather good!

The red stick on the right is plasticine, for ballast.

There is an annoyance with the gyration mouse (and also with Open/TrackIR) in that I can’t find a way to invert just the head tracker; as I play in game with mouse inverted, this is a real PITA.

This is the first time I have had all these components together in a (somewhat) usable form and it has to be said that the low resolution is not a serious negative when combined with the benefits of head tracking, high FOV and 3D – but in wide open spaces I felt that I could really do with more pixels.

I recall do recall in the old days, Populous, running in MCGA was more ‘firendly’ than 16 colour or VGA – the same was for several games of the time; you could have resolution and clarity or a feeling of ‘in there’ provided at the time by 256 colours on screen, rather than 16.

I am super excited about getting the real lenses now, being able to do away with the VR4 bulk and weight of the lenses.  Don’t know about head tracking yet though…

When I get my second cable I’ll play with dual screen, my IPD is *just* enough to get two side by side in portrait, but in an ideal world we want better screens.  I may also play a bit more with curved mirrors, but… The Rift would seem to have the future covered, so I may breakout my old copy of Vi and get some coding done instead 😉

I quite like the idea of focus and depth of field being generated by pupil / gaze monitoring.

This entry was posted in HMD Display, Projects. Bookmark the permalink.