The Samsung Pico projectors have a few shortcomings, which have hampered my efforts to get a twin projection rig assembled.  The major PITA is that, for some reason, they do not have the usual projection options for rear or inverse projection.

Since I am using a mirror to allow top-mounting, the rear projection flip option isn’t needed.  However, since the units are 7cm wide and the projection lens is offset to one side, by 5cm, I would have sorely liked to be able to mount one of the projectors upside down, this way I could use two identical rigs for holding them, which as well as being simple, would mean everything was symmetrical.  We like symmetry. 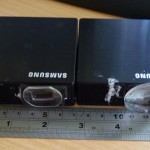 The average interpupillary distance for an adult is between 55mm and 70mm.  The VR4 can adjust from 52mm to 74mm.  Because of the width of the projectors, the bare minimum side by side is around 75mm.

Since,  I will ideally be using the end product with the ubiquitous iZ3D driver I politely asked them if they will be adding the option, within their driver, to flip a single display.  They said yes! Which is awesome support.

Also, you clever people are probably thinking that I could just do it with the Nvidia driver within Windows.  Well I can’t.  Although you can flip a single monitor in extend the desktop mode, it is the opinion of those in charge, that nobody would want to flip a single monitor when in clone mode, which is a shame.

iZ3D didn’t implement the feature immediately, though, and even now, with the beta drivers I can’t make it work – so I cracked on with a bastardised, ugly projector rig.

This is a working prototype now, with dual projectors, dual inputs.  Please remember this is a proof of concept rig! – I know it is butt ugly! 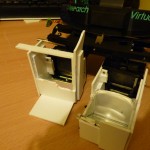 Since the earlier, cardboard based proof of concept, I have had to redo the lens configuration, since, the initially chosen lenses (from the butchered ebay projectors) produced an image just a few pixels to big… which although not a train crash, wasn’t great as it cut off extremities of the image.

Both picos have a small (but different) lens attached to it.  The right eye benefits from a ‘proper’ mirror, but suffers from having to have a second corrective lens to bring the image to 1.3” – whilst the right eye needs only the one lens to bring the image into line, but has a blue beam splitter as a mirror… this can cause some image ghosting, but is bearable for testing.  I have since found the Science Store and have ordered some front surface mirrors at a very good price. 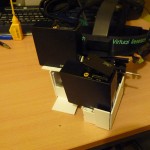 The rigs are made of 3mm acrylic, bonded with solvent for the housings and this screws into the VR optic housing – so no damage or modification to the VR4 optical housing is needed needed.  Although it looks a little unwieldy, it isn’t too bad at all.  To improve the layout, and weight, I could strip the projectors, enabling me to move them closer in to the head – but, obviously, I want to be able to reuse them!

The projectors have to be about 5.5cm from their mirror, so, to accommodate the right eye, I have moved the projector up, and the mirror closer to the eyepiece.  Going forward, perhaps with other projectors or DLP light engines, this is the better mounting point, as it places less strain on the VR4 own eyepiece mounts.

The projectors themselves are currently being attached to the mountings using good-old low temp glue-gun glue – this is harmless and mark free to the high density plastic of the pico’s and it bonds well with the acrylic.

The primary issue of this prototype is the wires; the weight of the VGA leads is actually more than the projectors, which increases the risk of me breaking the VR4 eyepiece mountings significantly, which is a scary prospect.  They also hinder movement significantly and cause the projector to break free from their mountings.

In the next part, I’ll get the projectors wired up through the VR4’s integrated wiring loom, this will not only stabilise the prototype rig, but, Tone tells me that the design of loom (coming out the back of the headset) actually stabilises the entire thing, making it rest better on your head.  Which is nice.