I have been somewhat poor in updating my research and progress with this project, due chiefly, to my tendency to meander and go off at tangents!

Following the test rig being up and running, with the primary issue being the unwieldy VGA cables, I decided I better push on and get some usable interfaces attached to the pony-tail loom on the VR4 headset.  This was pretty straight forward.

Well.  It should have been pretty straight forward.  What should have been an hours soldering, turned into a 5 hour swear-fest, as I simply couldn’t get the damn things to work – I must have soldered and re-soldered every connection about 5 times, because even thought the multi-tester said ‘yay’, the projectors said ‘nay’.

In the end, It turned out that I had soldered them in properly the first time, just that Windows 7 needed the display’s to be refreshed / rescanned before it would see the damn things! D’oh!

The reason for the refresh was because of the lack of proper ID bit setting, I think.  Anyway, the whole sorry time waste is behind me now.

The pony-tail contains 20 wires, 4 of which are used for the headphones and 7 each on the VGA cables. Leaving 2 for power.  I didn’t dare pin-in the power at this stage for two reasons, the first is that it may have ruined the display signal quality, the second is that the power cables are very light anyway.  Oh, I also forgot to pick up the bits at Maplins, but that’s not the real reason, honest.

In the end, the pinouts that I used are as follows:

Here are some pictures of the new wiring. 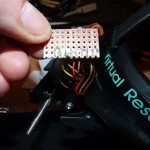 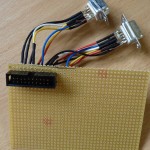 this the computer output plugs into 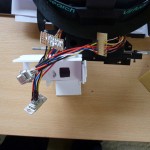 Although this all worked absolutely perfectly and allowed me to use the headset properly for the first time, sadly, my fears regarding the random lenses materialised.

Worse than that, the photo pixie came and stole the pics of the headset, in all it’s internally wired glory, right after I dissembled it.  What an utter arse ache.

Since each of the projectors used random lenses to get the image ‘just about right’, each image, as projected onto the eyepiece was not identical.  All was great when viewing each image individually, by shutting an eye – but with both eyes open, large portions of the screen were very hard to make out, due to optical dissimilarities in each of the images.  Big fat boo.

Since this was only meant as a proof of concept, anyway, I wasn’t too surprised, but I was terribly disappointed it didn’t just magically work – I had hoped that my brain would correct all but the most major visual defects… So I blame my brain.

Since I had (to myself anyway), proved that this *could* work, I started to think about other solutions to try, since I have had to the build of the pico and lens mounts from scratch anyway, I may as well explore other possibilities, this is, after all, great fun!